Linda Arceo’s new album “Just Believe,” is the triumphant cumulation of hard work, talent and perseverance distilled into one project. It’s the album she was destined to deliver and boy does she ever.

Arceo has learned enough over the years to not only hone her craft and develop her sound, but to understand that if you want to create your best work, you have to surround yourself with the best. She does this with “Just Believe,” which was produced by Barry Manilow guitarist Mike Lent with his producers hat on and engineered by Richard Bryant, who is just as well-known as an exemplary singer (with the White Album Ensemble, among others) as he is a recording studio whiz.

Arceo has assembled an all-star team of musicians, too many to name here, but including local legend, guitarist Tom Ayres, bassist Dave Marotta, who has played with Colbie Caillat and Kenny Loggins, saxophonist Gary Meek, who has played with Herb Alpert, Al Jarreau and Brian Bromberg, Manilow keyboardist Ron Pedley, who has also toured with Air Supply and Englebert Humperdinck, and jazz drummer Mike Shannon, whose extensive credits include Dizzy Gillespie, Lionel Hampton, Al Jardine, Huey Luis, and Andy Narell, among others. You get the picture. It’s a stunning assemblage of talent.

She wrote 10 out of 12 songs sings beautifully and plays acoustic guitar. She calls the completion of the album a “two-year musical odyssey.”

Stylistically, the music reflects much of the decades-long odyssey Arceo has been on, from her days as a solo singer-songwriter to her days leading a rockin’ band. There’s the Southern rockish “So Brave,” the lilting country of “Forever & Today,” the ’60s-style piano ballad “Some Faith,” the Santana-style Latin groove of “Finally,” and the ’80s rock feel of the title song “Just Believe.” In fact, you could almost guess what’s in heavy rotation in Arceo’s living room stereo and car: ’70s and ’80s rock, iconic singer-songwriters like Joni Mitchell and Carole King, women rockers like Melissa Etheridge and Heart, and classic rock from Steely Dan to the Eagles. The album is a nostalgic love letter to the iconic artists of those eras, will be seen as her crowning achievement and an album her fans have been desiring for years. All those years of hard work, passion and commitment poured into one remarkable and relevant album.

The culture suggested we quietly enjoy the dinner music in the background. But we were up and out our seats several times, dancing to such a wide range of music. There no sitting still when Linda Arceo is in the house – until she begins a love song, a ballad, a hymn. Then it’s a concert, and everyone leans in. Arceo’s vocal control enables her to sing with subtlety or with power her ability to sustain a note and ultimately resolve it is gorgeous. Her energy is wild, enabling her audience to feel, if only for the evening as vibrant, as sexy, as rock n-roll as she is, a Linda Arceo kind of cool.

Listened to Mike Lent’s production of Linda Arceo’s latest album last night. The opening song’s sonic harmony, and the vocal harmonies throughout, are superb. The production is excellent, and the performances by mostly local musicians serve the music well. My personal taste usually runs with up-tempo songs and I found “so Brave” and “Just Believe” to be lots of fun in that regard. However the ballad “Some Faith” was really a showcase for my ears. I can see this being in a movie.

I always look forward to working with Linda because she exudes such passion and energy in her playing and performance. I’ve seen her music quite literally create the party in various performance spaces over the years, from clubs to rooftops, commanding attention and interaction as a maestro of soul, rhythm, and fun. Her songwriting explores many universal, but also personal themes, and with strong musicality and form, fits seamlessly with the wide variety of popular covers also in her repertoire. As a supporting musician, I especially appreciate Linda’s strong rhythmic and dynamic sense - always easy to follow and feel. Likewise, Linda is one of the most organized and professional artists I know, making working with her a joy, not only for the music, but for all the important details that must go into planning a successful event. Linda is a rockstar on all levels!

Linda Arceo is one of the most talented singer songwriters on the Monterey Peninsula. The first time I heard Linda Arceo was in 2011, she opened for The Motels and her smooth voice and original compositions had me hooked as a fan. Having now seen her numerous times whether performing solo or accompanied by a host of who’s who of local musicians, her energy and passion stand out vividly. Linda’s versatility is simply amazing - ranging from folk to blues to downright rock n’ roll. Her performances cannot be missed!

"Local favorite Linda Arceo has played at the Pacific Grove Good Old Days for the past 12 years and we are absolutely thrilled to have her every year. She always has a prime spot on our main stage and never disappoints. Linda is great to work with and her music is a definite crowd pleaser! We look forward to having Linda at the 2016 Good Old Days and beyond!"

“Just Believe”, the new album from Linda Arceo, is packed with twelve well-constructed tracks with stellar musicianship and production. It's a clean, polished collection of country-laced pop songs about relationships that you can relate to.

Producer Mike Lent reigned in the talents of 16 world class musicians that include super tasty Santana-ish guitar parts from Tom Ayres and Ron Pedley's organs to add a delicious layer of keys that support the songs beautifully and paint Arceo's stories of love and loss.

Linda Arceo’s joy and love for music and how she gets into a song is infectious. She’s always ready to play and in the few years I’ve known her, I’ve watched her take her music to new levels each year and now fully expressing herself as an original artist playing original songs - in full living color - I love seeing and hearing this happen and unfold….great musicals stories yet to be told.

Linda Arceo has a powerful voice, and her original songs Are some of the best on the Monterey Peninsula. Everywhere she performs, whether as a solo artist, with her backup band, or accompanied by some of her amazingly supportive musician friends, she commands the attention of the ears and the hearts of those who are blessed to hear her. But for those who are in love, have ever been loved, or have loved and lost, her songs of hope and freedom cry out to be heard by all. I know her talent is appreciated by all who are fortunate to attend one of her many performances in the area.

I have performed with and listened to hundreds of musicians in my professional career and Linda Arceo stands out as one of my favorites. The energy she brings to a show is an absolute joy to experience. This talent mixed with her catchy original melodies and strong vocals makes it a pleasure to work with and listen too! 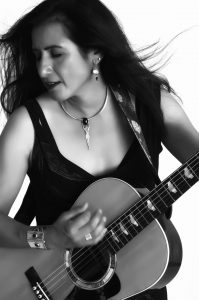